Here’s a new shot of Anna Torv from an article in The Sun-Herald for “Secret City”. 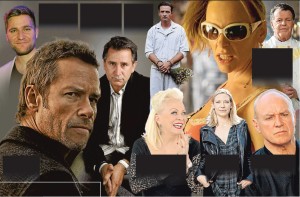 Here’s a fairly recent photo of Anna Torv with a fan in Los Angeles!  Courtesy of @creativUXdesign 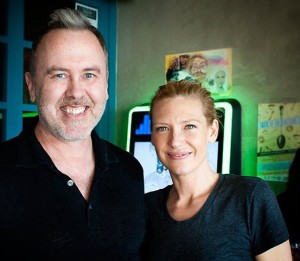 The Sunday Telegraph has published an insightful interview with Anna on her new role as senior political journalist Harriet Dunkley.

The Mandarin Code and Marmalade Files authors, who drew inspiration for both books from their careers in the Canberra press corps, secreted Torv into federal parliament on a research mission last week — ahead of her role as print political writer Harriet “Harry” Dunkley.

Describing the gallery tour as “a fantastically, amazing afternoon,” the brief experience inside Canberra’s answer to Capitol Hill only acted to thrill the 36-year-old more about her homecoming.

“I felt so naughty (sneaking in) but I was with Chris and he’s not going to get in trouble,” she trilled of her ABC adviser, “he’s been around.”

Admitting she’s been immersing herself back into the finer points of Australian politics since returning from her LA base last month, she sought some extra tips from two unnamed female press gallery regulars she confided would help inform her role.

“I got to speak to two amazing women and for sure I am going to draw a lot of (Harriet) from them.”

According to production notes, Torv is central to the storyline which opens “amid rising tension between China and America … journalist Harriet Dunkley (Torv) will uncover a secret city of interlocked conspiracies, putting innocent lives in danger — including her own.” Torv said Dunkley was “just a dream role. You always want to play someone who is smarter than you.”

Venice Days has released a press book for “The Daughter” complete with a few brief quotes from Anna Torv on Simon Stone along with her character Anna.

Anna Torv is a graduate of the National Institute of Dramatic Art (NIDA). In the U.S. she has become a household name as the female lead “Olivia” in JJ Abrams’ critically acclaimed television series Fringe. In recognition of her performance, Anna was honoured with several Teen Choice Award nominations, two Saturn Awards for Best Actress, and a Broadcast Critics nomination for Best Actress Drama, among others. Anna’s other international television credits include The Pacific, Mistresses and Frankenstein, and in Australia The Secret Life Of Us, Young Lions and McLeod’s Daughters. In 2014, Anna filmed the role of ‘Gwendoline Churchill’ in director Michael Rymer’s much anticipated mini-­‐ series Deadline Gallipoli produced by Matchbox Pictures. Anna’s feature film credits include Travelling Light, The Book of Revelation, and Love Is Now.

In theatre, Anna played Anya in The Cherry Orchard, directed by Howard Davies for Sydney Theatre Company, Hamlet’s ‘Ophelia’ for the Bell Shakespeare Company and the role of ‘Amelia’ in The Credeaux Canvas. Anna is currently in production in the U.S. on the feature film Stephanie, directed by Akiva Goldsman.

“Anna is about to marry Henry (Christian’sfather), that’s the reason Christian return shome, putting the carnage into motion. Henry and Anna have an honest and intimate relationship.” -­Anna Torv on her character Anna.

“He takes these really classic fantastic stories with awesome plots and makes them mean something today. He makes them current.” -­‐Anna Torv on director Simon Stone.

“Simon’s really articulate and he has a background as an actor and he’s been directing theatre and is used to being in charge. He knows what he wants. He’s happy to try different things. He thinks on the fly, but his directions are really applicable and also you can play them.” -­‐Anna Torv on director Simon Stone. 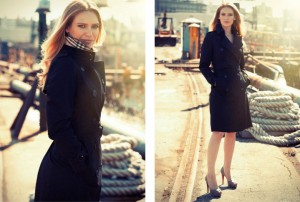 Anna Torv looks stunning in the first trailer for Simon Stone’s The Daughter!

The Daughter gets its first still featuring Anna Torv as it gears up for an international release!


The 72nd Venice International Film Festival has announced its title selection for its Venice Days section. The section will feature three Australian films including Simon Stone’s The Daughter. The Daughter will be playing out-of-competition and will close Venice Days on September 5th.

The Daughter will make its debut in North America as a Special Presentation film at the 2015 Toronto International Film Festival on September 14-15th.

Anna Torv’s The Daughter has been selected as one of five finalists in contention for the CinéfestOZ $100K Film Prize! This is Australia’s biggest film prize, which will be announced at the CinéfestOZ Festival on Saturday, August 29th.

The Daughter will have its Western Australian premiere at the festival. The film will be screened at Orana Cinemas Busselton at 5:30pm on Friday, August 28th. Tickets can be purchased at the official website for CinéfestOZ.