We have added two additional videos to our 2011 and 2012 event galleries.

Showcase has released a new trailer for their upcoming 2016 dramas!  New footage of Anna Torv can be seen at the 00:56 mark!

Showcase has released the second full trailer for Secret City!

Foxtel and Showcase have released the first poster for Secret City! 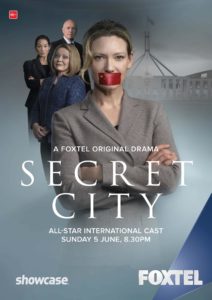 Showcase has released the first official full trailer for Secret City! The miniseries premieres on Showcase on June 5 at 8:30pm!

INSIDER: There’s a lot of expectation about the series and the books that it is based on.

ANNA: Secret City is inspired by the books. There was a big push to emphasis the thriller element from the books, which were a lot lighter in tone.

Steve Lewis is a really respected journalist as well.

MARCUS: He carries a lot of clout too. There was one point where he got in touch with a representative from ASIO and opened a few doors that were rare to enter through. It was quite extraordinary.

ANNA: We did all those scenes in the Prime Minister’s courtyard too.

INSIDER: How does that feel as an actor to be able to access these kinds of places?

MARCUS: Wherever you go you’re with a film crew that kind of take over. But actually in Parliament House, that didn’t really happen. I think everyone was kind of enamoured by the place. Everyone was really polite and quiet. And perhaps feeling like they were being watched all the time.

ANNA: We were. You couldn’t even go to the bathroom without somebody with you.

ANNA: Getting an insight into the members of the press that actually work at Parliament House and the fact that they can run straight from a media conference to their office was really fascinating. Going from this order of calm at the conference to this chaos in the office of people running around saying, “I’ve just got this!’

INSIDER: Foxtel is establishing a name for hard-hitting, great dramas. What will differentiate this show from others that are out there?

BENEDICT: The style and drama that has been delivered has established a great drive in this series. It’s been a great cast to work with and collaborated with telling a story in an area that hasn’t really been broached before and the way in which it is shot too is a token of the quality that the show has set out to achieve, which makes it stand out too.

Secret City premieres in Australia on Showcase on June 5 at 8:30pm! Check out the first official teaser trailer below.

We have two extremely rare audiobooks which were narrated by Anna Torv! Anna recorded several children’s audiobooks in 2005 for Scholastic Australia’s Solo Collection. We have located two of her audiobooks, Jack’s Owl and Little Fingers, which you can download HERE and HERE or listen to below!

Update: Foxtel has requested that the trailer not be distributed on the Web.

Anna Torv fans, as our site approaches its one year anniversary we want to thank you for all your support! The Fringe community crossed the line in 2013 and we couldn’t be more thrilled to see its legacy live on through Anna Torv as she boards David Fincher’s upcoming Mindhunter series for 2017! As we move into a new season, we have revamped Annatorverse.com and have transitioned to a brand new gallery for all your Anna needs! Here’s to 2016! And don’t forget to join us on Twitter for immediate updates on Anna!